It has been a while, Avertigos, but we have not been idle – a lot has been bubbling and brewing under the decks in the furnace!

One of the things we’ve been working out down at our office is the paint guide for the ships – as much as we love our miniatures, we want to unleash them on the unsuspecting in all their glory. To that end, George and I were locked away in a tiny room for hours on end with only our paints for sustenance, with Shailesh and others being rotated in every now and then. I am please to announced that I have since lost 10 kilos. 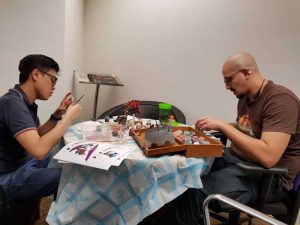 Our first major consideration was what colour the undercoat would be; black or grey-white? Black is a fairly forgiving colour to work with, and can bring colours down so that they look menacing and fierce. White, on the other hand, while being less forgiving of missed spots and mistakes helps make colours really pop. Plus it’s so much easier to lay on a lighter colour on white than black.

So we did what any sane person would – we primed in both! 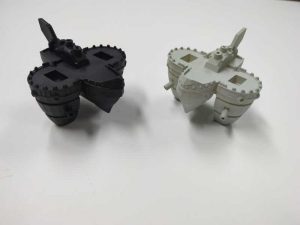 We didn’t prime with both colours at the same time of course – we experimented with a black undercoat first. Our thinking was that while the ships should be gleaming, they should appear forbidding to deter anyone who had designs on the ship. Deciding between what type of brown to use for wood panelling, and how we wanted the pontoons of the frigate to look. 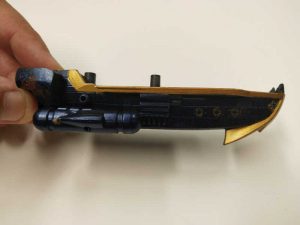 One of our attempts to get the metallic blue of the Dynasty ships, using Tamiya’s Dark Metallic Blue Spray.

It was going well for the most part – we were very happy with how our metal plating was coming out, for instance – right up to the point where we started applying our lighter colours.

The first issue was that it took a large number of coats to achieve the colours we wanted – something we wanted to spare our backers and fans of the series. The more pressing issue though was that these colours came across as very muted – the ships had a darker air, but the areas that were supposed to stand out did not as much as we wanted. This Destroyer’s hull was a mix of a regular acrylic blue paint and Citadel’s Ironbreaker paint.

But we had a good idea of how to achieve the colours we wanted, so this was where we primed a new batch of ships in gray-white. I’ll cover that in our next post, so keep an eye out for it!